Top Posts
How to Bounce Back Faster After a Big...
Goat Milk Yogurt With Blueberries and Raspberries
Hard to Digest Foods: 5 Foods That Can...
Escabeche Vegetable Salad Is Spicy and Good
10 Ways to Help Lower Blood Pressure Naturally
The Perfect Juice Cleanse for the New Year
Seven-Day Detox Through the Seven Channels of Elimination
Mirepoix: Freeze Ahead to Speed Up Recipes
Five Ways to Get Rid of Your Candy...
Tender, Fall-Apart Slow Cooker Pot Roast

Do I Smell? Putting Natural Deodorants to the Test

The scariest question you can ask yourself is not “Why do I exist?” or “What am I supposed to do with my life?” It’s “Do I smell?”

Well, that’s probably what you think you smell like. That’s kind of what we all think we smell like, thanks to James Young, the copywriter for Odorono, the first commercial deodorant, who wrote in Ladies Home Journal, 1919:

“It is the chemicals of the body, not uncleanliness, that cause odor. And even though there is no active perspiration­—no apparent moisture—there may be under the arms an odor unnoticed by themselves, but distinctly noticeable to others.”

James Young was not entirely wrong. Underarm odor is caused by the apocrine glands, and despite Young’s assertion that uncleanliness doesn’t contribute, it does. A little soap and water go a long way in washing off the oils and bacterial effluvium that’s building up, leaving you smelling fresh as a daisy.

For a little while.

Even the cleanest, most fastidious bather may find themselves standing in the office, knowing full well they applied deodorant that morning, secretly panicking, asking themselves: why do I smell?

Assuming you’ve performed your daily ablutions and applied a film of deodorant … well, it’s hard to say. Bodies are weird. But what’s wafting out of your body may be the result of what goes into your body.

You Sweat What You Eat

Your body breaks alcohol down into intermediary compounds, the bulk of which are two chemicals, Acetaldehyde, which transforms further into Acetate. Those compounds are secreted onto your skin in your sweat which is then metabolized by bacteria, giving you that next day, I-went-on-a-bender, bouquet.

Red meat is full of fat and Sulphur compounds. A report from Evolution and Human Behavior suggested perspiration from men on a plant-based diet was considered by women to be more appealing than sweat from their carnivorous bros.

In 2002, Neuroendocrinology Letters, published findings from the Ludwig-Boltzmann-Institute for Urban Ethology. Three of their scientists made 42 women between 18 and 33 watch the 1992 horror flick, “Candyman,” while collecting samples of their perspiration. When asked to rate the odor of samples from before and after watching Virginia Madsen almost die in an inferno started by a psychopathic murderous urban legend, the women found the post Candyman samples less appealing, saying they smelled like rage, aggression, and fear. Candyman maintains a rating of 74% on Rotten Tomatoes.

If you’re more worried about sweat than smell I have some bad news. Using antiperspirants can make your armpit bacteria go crazy, resulting in an increased odor. This may be the result of the salts and aluminum in antiperspirants throwing off your armpit biome, allowing the smellier bacteria to thrive and Karen from accounting to avoid you in the breakroom.

What Can I Do So I Don’t Smell?

Shower more? That’s great for remote workers and professional shower testers, but for those of us who work in an office, a second shower is not an option. That’s why we use deodorant. Maybe if we switched from chemical-based applications to natural ones we might smell less?

Deodorants are a personal choice. If you ask science for a little help, it just rolls its eyes and goes back to reading abstracts because science doesn’t care. There is not a lot of research indicating natural deodorants are healthier for you than those made from nuclear waste. But these facts are indisputable: The ingredients of all-natural deodorants are all natural, so if you are a person who believes your environmental footprint should be as dainty as your B.O., then load up.

Here are three natural deodorants that use essential oils and natural extracts. And because I’m serious about this, I used them while at Fish Camp in Michigan, then on a trip to Alabama in June when it was 900 degrees. You’re welcome. 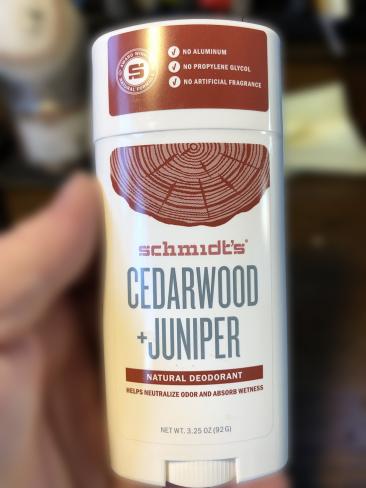 Method: I applied Schmits on the first day of Fish Camp, walked outside and realized I was in Michigan and it was 30 degrees and I was on a lake. Sweating was not so much an issue. However, neither were the fish so we retired to the cabin where my friend’s one-million-year-old father kept the thermostat pegged at a balmy 81 degrees, with a fire. I sweat through my t-shirt. I sweat through my hoodie. I sweat through the walls, into the forest and poisoned Lake Hamlin.

Results: These tests were super scientific, so I did not disclose to my test subjects that I was trying out natural deodorants. I was waiting for someone to notice. However, even after changing multiple shirts (seriously, it was hot) no one complained. They were pretty upset about the fishing, but I smelled like a warm spring arboreal dawn. 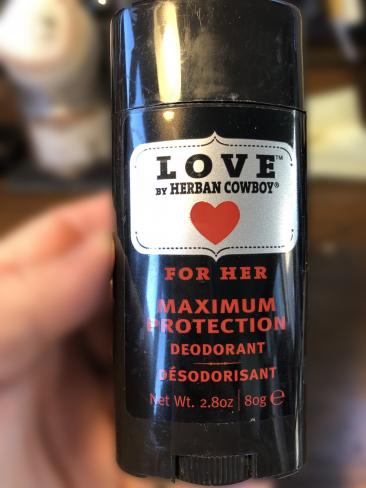 Herban Cowboy’s “Love for Her”

Method: Right before a 13-hour drive from Chicago to Birmingham, I applied Herban Cowboy’s Love for Her. It was humid and warm when I left the Windy City, but as I propelled myself southward, it got warmer and humider until every time I walked back to my car at a rest stop, I was damp and slightly woozy. To test the deodorants efficacy, I wandered among the incoming hordes of travelers to see if I offended anyone.

Results: I did not. 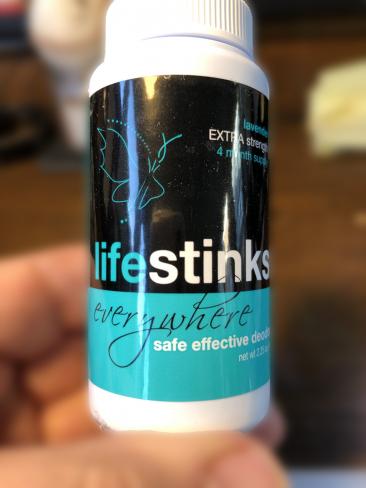 Method: On my first day in rural Alabama, I washed and dried then, using my fingertips, applied the Duggan’s sister’s powder. I assumed I was going to make a huge mess and get powder everywhere and sneeze a lot. I did not. It was a cinch to apply and stayed where I put it. Sure, it’s a little gross as I am a large man who does not [editor has redacted this entirely superfluous information about Mr. Garlington’s armpits] and so, yeah, it was weird.

Results: I did not smell. Not at all. I didn’t smell like tea tree oil or lavender. I just didn’t smell. And the bottle lasts four months. My stick deodorant lasts about three weeks and that’s only because I work at home and the dog doesn’t care how I smell. This stuff will last me the rest of my life.

Your Mileage May Vary

Body odor stinks. The multi-billion-dollar industry serving that problem (and constantly telling us we smell) proves that point. But if you follow the advice above and perhaps use a really good natural deodorant, you’ll smell like a daisy. Or a forest. Or nothing at all.

Do you have a favorite? Tell us all about it in the comments below.

Healthy Grab and Go Snacks on the Run

Why Should I Use Xylitol in My Toothpaste?

How to Bounce Back Faster After a Big...

The Perfect Juice Cleanse for the New Year

Five Ways to Get Rid of Your Candy...

Do Chemicals Absorb Through My Skin?

Summertime Skincare: What is the Best Sunscreen to...